Introducing Profile Flair. A way for you to show your accomplishments!

What are these icons?

The icons are divided into two main categories:


Icons you can add to your signature yourself
these badges members can add to their signatures as baiting goals (bank accounts reported, safaris, etc.) are achieved.

Mod awarded icons
those awarded by the moderator team. These include awards for things such as extraordinary safaris, results in reporting bank accounts or shutting down fraudulent websites. Among those awarded by the moderation team are a few "special" icons, that are fun icons that do not have specific meanings. Some of these are awarded now and others were used during previous times in the forum's 14 year history. More on those below.

How to add icons to your signature:
Simply go to the User Control Panel (using the dropdown menu next to your name, at the top of the webpage, then to the Profile tab. Click on "Manage Profile Flair". Here you can add the user icons. They will show up below your name when you post something, and on your profile. For most, if not all, user icons, you can add a number. PM Bertje if you want a number added to an icon. If you hover over the icon, the number will be displayed. You can use this to display the total amount of bank accounts reported, for example.

This little piggy represents scammer bank accounts reported to a mod or your mentor using the PM system. As the mods don't alert you to the progress of the reported bank, even getting a scammer to give you a working account and having it reported is good enough.

This one represents reported stolen credit card details. They can be reported to the Moderators by using the PM system and you may then add the icon to your signature.

Hats are for safaris. The rule for safaris is minimum 200 miles traveled distant from the lad's starting point (i.e. 400 miles round trip) OR an international border crossing. Getting a lad to travel this distance is the goal. In order to legitimately claim a pith helmet the journey would also have to be verified (for example with IP proof). Other solid evidence that the lad has traveled may also suffice, such as a selfie in front of a fixed landmark, hotel receipts or calls from fixed lines, or travel documents like visas, passport stamps, bus tickets or airline boarding card stubs. Geotags in digital photographs' EXIF data are also strong evidence for a lad having moved.

The Sand timer is used to identify your longest running baits, however you wish to present them. (eg: Lad Buggins - 17 mths) This is awarded for a bait lasting longer than 12 months of continuous baiting. Not just sending an email once a month to say 'hi' - We mean continuous baiting. You need to have a lad on the baited hook for over 12 months.

This icon designates the completion of a Church Bait-related monument.

Video camera icons are for getting a scammer to make a video for you.

Audiobook icons are for getting a scammer to record themselves reading an entire book.

Badges are the ultimate Eater trophy. This icon is to recognize someone for their part in bringing a scammer to justice for crimes related to 419 scams only. These crimes are difficult to prosecute so the icon is very specific. Badges are not awarded for unplanned or inadvertent detentions due to a lad's inability to pay a driver, lack of proper visa, or other incidental run-ins with law enforcement, though we all enjoy reading about those!

This is a special award given by the Eater staff. The criteria for getting one is a mod room secret, so don't ask!!

Is awarded by the mod team for an extraordinary safari. What specifically is classed as a extraordinary safari? These won't be handed out willy-nilly. The Golden Pith is for those extra special Golden Safaris. (It means we'll probably put it to a poll of some sort)

This golden piggy is awarded by the mod team for extraordinary achievements in shutting down bank accounts.

Knighthood is not given, but earned, through unrecognized extraordinary efforts.

is awarded for innovative member contributions to the eater community, for example developing new baiting tools and modalities.

This one is occasionally awarded to winners of eater baiting contests.

The yin yang is for getting a lad tattooed.

This is awarded to baiters who provide websites specifically for getting lads to go on safari.

This has been awarded in the past (and may be again) to baiters who have their lads dress up as Santa as part of a baiting contest.

This has been awarded for having lads dressed in extraordinary costumes.

This is awarded to baiters who get their lads on 50 safaris.

The Big Boss wrote:The star does serve a purpose, however it can only be awarded by yours truly, and I never give an explanation for it

This one is for anyone who manages to get their baiting activities on TV or in the media. Of course, a quick mention of Eater or Scamwarners in any article would be a help and would guarantee that you'll end up with it in your siggy!

These are extraordinary and you have to do something noteworthy to earn them. If you have been awarded one, try and figure out what the hell you did to deserve it (because we aren't telling) and keep up the great work.

Send your calvary greetings | What is a mentor? | Forum Rules | | The Mod Team

Disclaimer: This is a work in progress. Icons are being added as we speak. Not all advertised functionality might work (now or in the future

Thank you to Padme for the original post, back on 'old eater'
Send your calvary greetings | What is a mentor? | Forum Rules | | The Mod Team

If we're used to the signature-based system, are we required to switch to the profile flair?

"ALL THE SAME NOT AN UNGRATEFUL BITCH"-Mr. Humphere
"Bro i have seen hell"-Mr. Humphere
"Also i know how inquisitive all this press can be, i hope the picture of the goat fucking me is not on news or news paper"-Mr. Humphere
"GO TO HELL JUSTIN for having played with me all these while, what the fuck is wrong with you you are such as an asshole"-Charles J Colocino JR
"I will tell you I'm a computer illiterate I know more than you" - Eric Marshall
Hello! ~Kitty

"Required?" No. Signatures, and Flair for that matter, are optional "perks." Some people will never choose to use them. Others will obsessively attempt to collect them.

All Mod Awards going forward will be via Flair, however.

Quantities may still be added and are visible when hovering over the icon (keeping things neat and tidy): 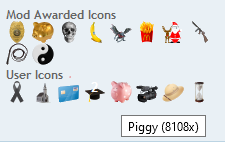 Additionally, clicking on the Flair leads to a "description" of the icon...or at least an attempt at one. The smilies in signatures now have no link to their meaning and may just become confusing.

All of this allows more room in signatures for lad rants or even links to your favorite baits. Additionally, it gives us cleaner, more modern icons, that are a bit larger than in the past.
REPORT BANK ACCOUNTS | FOLLOW 419EATER ON TWITTER

This is very cool. Nicely done.
"Your knife will surely cut off your head trust me. Useless man zombie."
"Shege danburuba, your end has come. The spirit of all the people you kill is after you now and you can not excape it. See you in hell dan esika."

Users browsing this forum: No registered users and 5 guests