And I'm not talking about having some sympathy for victims or they pull at your heartstrings (because as we've seen, these are people who will pose as dying or deceased people to make their scams more credible and they are also people who will profit from tragedy after all).

I mean, in your experience, are your lads fairly cooperative and will willingly do what you ask of them (whether you want them to send you a picture or something) or are they obstinate and lazy (yet determined) sods who try to make you work for them instead of them trying to work for you?
Top

Lads come in all kinds of flavours but I found that they are not as complying as they were (let's say like 10 years ago when I started baiting).
That said, if you look at Birlic's achievements it shows that there are still lads out there willing to do some "work"

yOU WICKED AND EVIL MAN,PERISH TO HELL WHERE YOU BELONG - Obinna

You have made me get to take my drugs. -Claude Dominique after ticking over 1000 boxes-

why must you act like childish game. -Eng Uzeze-

why are u so stupid and fullish like that go to hall. u idiot - Topman Stephen

LOOK AM SICK AND TYRED WITH ALL THIS TAMBAMBLING OF YOUR. -Barr. Bulunga-
:peng: :e-egg: :e3:

I bet there are.
Top

Each lad seems to have his own threshold of how hard they will work, prob. depending on how hungry they are for your cash. Some are cautious and lazy by nature, while others are anxious to please. It all depends on who it is replying at the other end of your email. Last year I was part of a team which safaried two would be "chicken farmers". The first was lazy, hated filling in forms, and who replied to messages with a minimum of words. It was all we could do to get him to cross over to Benin. The second one did two safaris and had an epic 6 country adventure while doing so. It was the same storyline, basically the same characters, the same reward......and yet the response from the lads was entirely different.

If you count his trip to Siguiri as a separate safari, he did 3. Oww, I miss Lucky.
Send your calvary greetings | What is a mentor? | Forum Rules | | The Mod Team

^^^ the 1st chicken lad was so obnoxious. Just about any request you sent him was met with a "fork that sh!t" reply. I was pleasantly surprised that he did manage to go on safari. Lucky however was a real gem and the Siguiri adventure was hilarious. His initial plan was to convince the Imam in Siguiri to let him bring some random homeless Nigerian chick he just met because she had some money to make the journey. The Imam shut that down immediately but it didn't really matter in the end because she ghosted him for fear that he was planning to kidnap her

Then he said that he was considering selling his shoes to pay for the bus ride to Siguiri. It would have been amazing if he did that but I think he managed to find a way to pay for the ticket. All that was after he went to the Nigerian embassy in Bamako to ask for help. All they could offer him were forms to apply for refugee status. You really can't make stuff like that up. I wonder how often he thinks back on that failed adventure. Every day I hope

I've noticed that since my return to baiting a few months ago after an absence of some 8 years, is that lads don't seem to want to part with more than one bank account these days. Many of them refute my assertion that the receiving bank account is 'under review', as they claim to be successfully receiving money from other people - which saddens me greatly, more for them than for myself.

Also, quite a few of them are wise to my reasons for wanting them to use the Moneygram 'hotline' - again, they say they don't have to do that for all their other 'clients' so they won't be doing so for me.

On one of my longest-running baits, I literally got dropped for refusing to provide photo id and repeatedly asking the 'bank' to call Lenny.

That said, I have had one major success with the lad who got his stoolie to call the MG line (who then feigned death to get out of making any further calls

"And please stop telling everybody that you want to receive money because of eye brows, envy and jealousy, until you receive your money in your account, then you can tell them" ~ Kelly Craft, US Ambassador to the UN (probably)
Top

...as they claim to be successfully receiving money from other people.

Unfortunately, they are probably telling you the truth here. It kinda sucks that lads are getting turned off by MG but the silver lining is that they are likely to refrain from asking real vics to send $ that way. If they attempt to steer victims clear of MG but recommend using WU or RIA then STS's mention of someday upgrading the hotline to allow scammers to select "1" for MG and "2" for WU and so on will be worth its weight in gold. An entire community of lads could be directed by their Oga (boss) to steer completely clear of traditional fast money transfer outlets.

As far as the bank account subject is concerned the lad is just trying to flex his proverbial muscles by waging a standoff. If your bank says the transfer failed because the account he gave you rejected the transfer then it is what it is. You could try again but it will still get rejected so what's the point?

This stage is one of the best times to throw up your hands in frustration and solve the dilemma by sending your innocent and precious lad a wad of cash and other expensive goodies via a 5 Star Service + trustworthy shipper. Then a nice safari scenario can play out. Unfortunately, those aren't allowed right now

If you get a mailing address from him you could claim to have sent him some $ by traditional mail. Obviously, something will go tits up and the $ will never arrive. Alternatively, after bickering back and forth about the legitimacy of the bank account you could send him a reply thanking him for his understanding and for finally providing you with an alternative account. Obviously, this is a chop scenario in which a fake lad managed to intercept your conversations with the real lad. Fake lad pounced on the fact that the real lad was wasting time trying to convince you that the ITP Mule/Associate account was legit just long enough for him to pose as the real lad so you could send him the cash instead. Expect a nice rant. He either won't believe you and chew you out for wasting his time or cuss you out for being so stupid for sending cash to a faker. Either way he's pissed and completely forked. He may drop you if his temper is short but don't be surprised if he comes crawling back or you get scam mail from someone else that is worded a lot like how this lad speaks. They tend to try to attack from multiple angles to see what does or doesn’t work.
Top

Claus Shaeve wrote: ↑Mon Jul 06, 2020 6:05 pm I've noticed that since my return to baiting a few months ago after an absence of some 8 years, is that lads don't seem to want to part with more than one bank account these days. Many of them refute my assertion that the receiving bank account is 'under review', as they claim to be successfully receiving money from other people

My experience is lads have more accounts than ever. I expect three from the average run-of-the-mill scammer. Please, never tell a lad the mule account is "under review." Why? Because once you report it to a Mod, it is turned over to the bank who then puts the account "under review." You are then interfering with an active investigation.

Remember, it's always a lad's fault. Ask them why the account can't receive your money. Real businesses have real accounts. No bank would dare invade the privacy of their account holders and tell someone why an account could not receive money; they would insist the sender ask the receiver, right? Does the scammer still insist the account is receiving transfers? Well then demand an account statement from them showing these transfers so you can take it to your bank and demand the manager send your money to the account right away.

ETA: Moved here from Main since the topic is about scambaiting.

You want a lad to obey you? Take time. Become real. Make your characters convincing. Then, introduce other characters. Make a web of people with your lad SOme of them are there for a lee while. Others can be active for years. I do not get attached to my characters, and kill them when it serves the narrative and I have other character engaged with him. At some piont, it all becomes real. 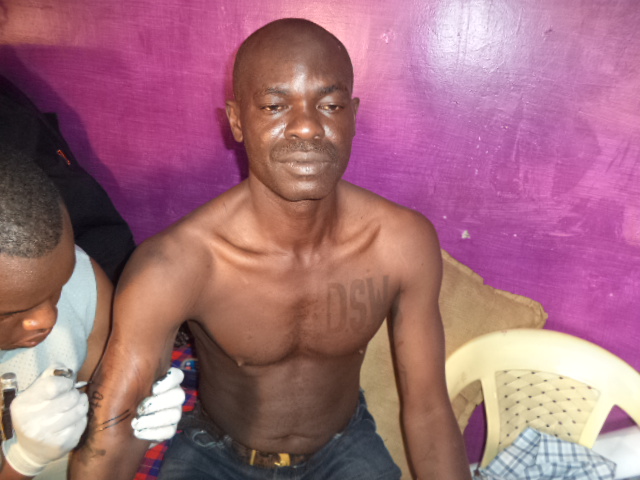 Thats Turd. Turd was on the hook for 6 1/2 years before he vanished somewhere between Kenya and Dubai. Here he is getting one of his seven tattoos. It says "4:19 Eater'. He has DSW on his chest. He has another 419 eater tat on his stomach. He was a special lad, and put 28,000 miles of travel on him, but the key was that he was skillfully baited by a lot of baiters for a long time, and over time it all became real to him.

Want your lads to obey you? Become real. 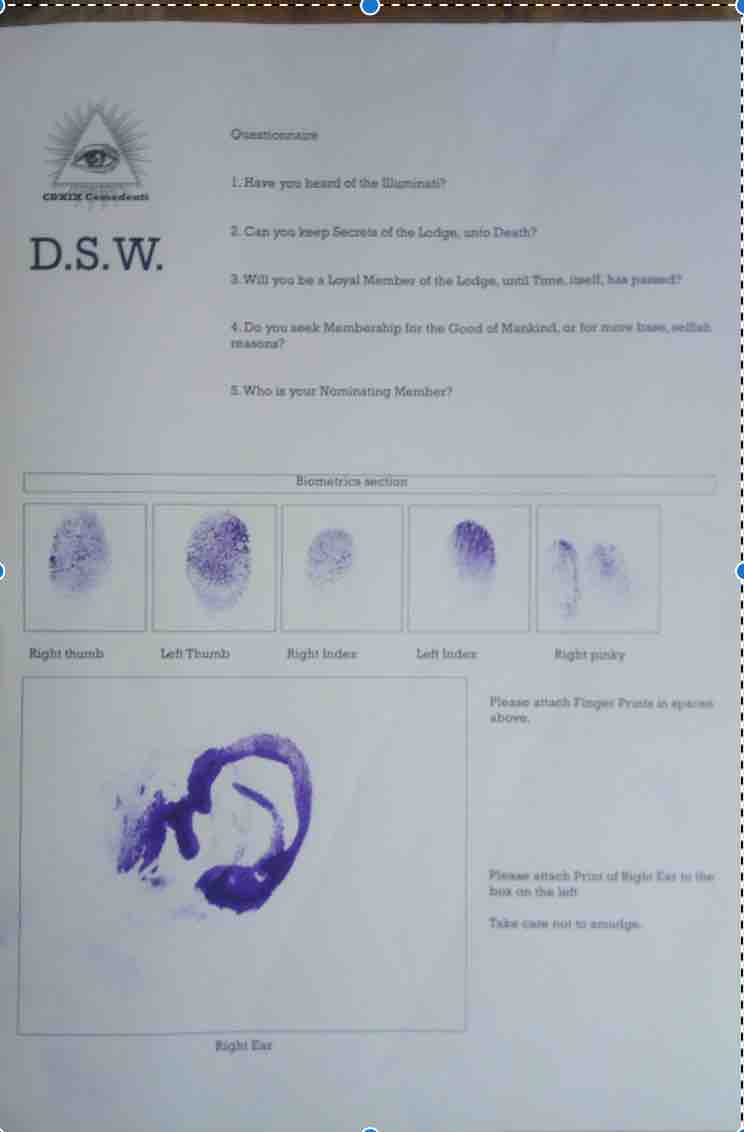