Sergiy of the UN 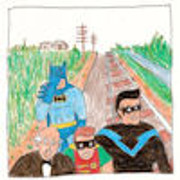 Sergiy of the UN

A few weeks ago, the church received an email from Sgt. Priscilia Enoch, IDF officer currently in Ukraine and "heavily under severe attack by the Russian Military Force". In between rocket attacks she wanted our help in transferring a large sum of money.

Regrettably we were unable to assist being simple church folk, but took the opportunity to ask

Father Peter wrote:The church has been fundraising for the past month and I'm unsure what to do with the donations. We have raised just over £9,000. My parishioners have made it clear that they wish the money to go to ordinary Ukrainians, not to one of the big charity organisations that take large admin fees. You hear so many horror stories of charities not distributing donations properly nowadays.

Is this something you could help us with? Do you know of a local charity in Ukraine that we could send the funds to, so that they can distribute it to those most in need?

Everything was going well. We had received a bank account to pay the funds into and an address in Gdansk, Poland to send 10 laptops, kindly donated by a member of the congregation that owns a small computer shop.


Father Peter wrote:Unfortunately we have a small problem and I can only blame myself. I
left in a rush on Wednesday evening and thought my instructions were
clear. However instead of paying the money into our bank account and
then sending it to you via bank transfer, Mrs Auberry has put the money
inside the package containing the laptops, which has been picked up by
the Plog. I must confess my mind was elsewhere when I heard of my
mother's fall. I take full responsibility and can only apologise.

Now I usually find the lad panics and asks for the parcel to be re-routed to West Africa, but not this time.

So with the money and laptops safely on their way to Poland and thoughts of fun, Sergiy made it clear he would not travel anywhere to collect the parcel, so even a local safari to the next city was out of the question.

The church was close to recalling the parcel when it found an active webcam https://gdansk.webcamera.pl/
... which coincidently is close to Plog’s depot in Gdansk.